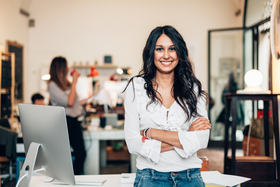 Unicorns have been a huge trend in and out of the tech world in the last few years. While silver hair and rainbow eyelashes characterized a nostalgia-inspired beauty trend, the “unicorn” label more prominently describes disruptive startup companies valued at $1 billion or more.

Yet the age of unicorns could soon see its dusk. As bloggers voted “Baba Yaga” the next unicorn in beauty, the “zebra” emerged as a practical-yet-fantastical unicorn alternative in the tech world. Following a year in which “feminism” was the reigning term and female silence-breakers graced the cover of Time, it should be no surprise that women are leading the charge in this transition.

Why zebras? Unlike a mythical shiny-horned horse, zebras are real. As companies, “zebras” are also grounded in reality: Their goal is solve meaningful problems while repairing existing social systems. As the Medium article proposing this concept aptly describes, zebras fix what unicorns break without sacrificing profitability.

VCs have long been attracted to unicorns, which in part explains the gender gap in VC funding. Women tend to create more practical businesses that are less risky and more socially conscious, traits that characterize the zebra concept. As cause marketing grows, VCs may find these investments more worthwhile than unicorns, which at times come with more problems than they are worth.

To understand the problem with unicorns it’s important to understand where unicorns came from, what’s exciting about them, and what can make them problematic.

The term is still new, coined in 2013 by venture capitalist Aileen Lee to describe how rare they are. But unicorns aren’t so rare anymore: as of March 2017 there were 223 unicorns, Uber, Pinterest, and Airbnb among the largest. The quantity of unicorns has led many to worry about a unicorn bubble, which would result in dead unicorns upon bursting.

Some unicorns, like Groupon, have imploded. Others have skyrocketed to success but in doing so have done damage, all while hoarding huge profits by remaining private. Facebook has arguably contributed to social good, but was also a vehicle for vicious fake news propaganda. Uber, for its part, has weathered a shocking number of scandals over the last few years.

As CEOs Mara Zepeda and Jennifer Brandel wrote for Quartz, the problem with our obsession with unicorns is that “it rewards quantity over quality, consumption over creation, quick exits over sustainable growth, and shareholder profit over shared prosperity.”

Focusing exclusively on unicorns is not helpful in a world with numerous pressing problems in finance and beyond. Is it so radical to support businesses that “repair, cultivate, and connect” instead of chasing companies bent on disruption? In a capitalist society that knows no different, it may be a hard to make the shift, but worthwhile to attempt nonetheless.

The rise of the zebra

Along with Brandel and Zepeda, female founders Astrid Scholz and Aniyia Williams first proposed an alternative style of investing that focuses less on unicorns in their “Sex and Startups” article in 2016. In it, they suggest the future could hold “another style of investing, one that recognizes founders with long-term, wide-ranging visions” which focuses “not only on how much money is raised, and on investor returns, but also on how we generate value for users, elevate communities, and build a more equitable and inclusive system.”

The overwhelming resonance and response to this sentiment led these women to form The Zebra Project, publish more literature on the topic, and form a conference called DazzleCon for founders that identify with the zebra ethos.

While these women may have put a name to the idea, it’s worth noting that there are startups out there that may be zebras without knowing it. Entrepreneur’s Handbook cites Basecamp, Zapier, and Mailchimp as startups that “fit into the current market instead of blowing it apart and seek long-term survival through sustainable, responsible growth.” (These examples, it’s worth noting, all have male founders.)

Investors need to change their tune, though, for zebras to get the funding they need to make an impact, and become a model rising entrepreneurs will seek to emulate.

The Zebra Movement, as kicked off by Brandel, Zepeda, Scholz, and Williams, is building momentum. But is it enough to change an investing culture that prioritizes quick growth, big return, and a churn and burn style of making money?

It may take more dead or corrupt unicorns before we see a dramatic change, but trends toward socially conscious investing, diversity initiatives, and out-of-the-box VC strategy are lights in the tunnel ahead for entrepreneurs, and women especially. Consumers are increasingly drawn to impact-driven, minority-run businesses, so investors would be wise to follow what sells.

Who knows? It may be that losing a few horns to gain some stripes is the best decision this zoo of a world could hope to make.