Before Visual Basic 1.0 was introduced to the world in 1991, developers had to be well versed in C++ programming, as well as the rudimentary building blocks (Windows API) of the Windows system itself. This complexity meant that only the dedicated and properly trained were capable of turning out software that could run on Windows. Visual Basic changed all of that, and it has been estimated that there are now as many lines of production code written in Visual Basic as in any other language. Visual Basic changed the face of Windows programming by removing the complex burden of writing code for the user interface (UI). By allowing programmers to draw their own UI, it freed them to concentrate on the business problems they were trying to solve. Once the UI is drawn, the programmer can then add code to react to events. Visual Basic has also been extensible from the very beginning. Third-party vendors quickly saw the market for reusable modules to aid developers. These modules, or controls, were original referred to as VBXs (named after their file extension). If you didn’t like the way a button behaved you could either buy or create your own. However, these controls had to be written in C or C++. Database access utilities were some of the first controls available.

When Microsoft introduced Visual Basic 3.0, the programming world changed again. Now you could build database applications directly accessible to users (so called front-end applications) completely with Visual Basic. There was no need to rely on third-party controls. Microsoft accomplished this task with the introduction of the Data Access Objects (DAO), which allowed programmers to manipulate data with the same ease as manipulating the user interface.

Versions 4.0 and 5.0 extended the capabilities of version 3.0 in order to allow developers to target the new Windows 95 platform. Crucially they also made it easier for developers to write code, which could then be manipulated in order to be used by other language developers. Version 6.0 gave us a new way to access databases with the integration of ActiveX Data Objects (ADO). ADO was developed by Microsoft to aid web developers using Active Server Pages to access databases. With all of the improvements to Visual Basic over the years, it ensured its dominant place in the programming world. It helps developers write robust and maintainable applications in record time. 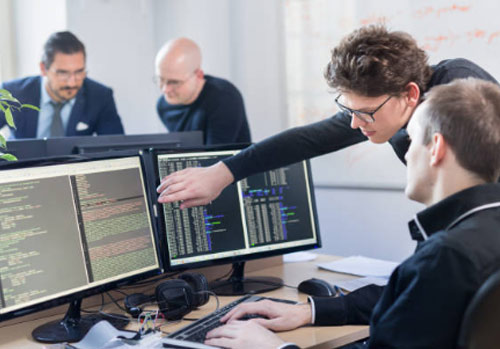 Windows programming opened up the world of event-driven programming. Events in this context include, for example, clicking on a button, resizing a window, or changing an entry in a textbox. The code that you write responds to these events. To go back to the hallway analogy: in a Windows program to get to the end of the hall, you just click on the end of the hall. The hallway can be ignored. If you get to the end and realize that is not where you wanted to be, you can just set off for the new destination without returning to your starting point. The program reacts to your movements and takes the necessary actions to complete your desired tasks. Visual Basic .NET simplifies the process of writing the code to handle each event by allowing the programmer to write code only for those events that mean something in the context of the program. All other events are ignored. For example, Windows distinguishes clicks from double-clicks, which means that if you only want your program to react to a single click, you need only write code for this single click; you do not have to write code to handle both single and double-click events.

Another big advantage in a Windows program is the abstraction of the hardware. What this means is that Windows takes care of communicating with the hardware for you. You do not need to know the inner workings of every laser printer on the market, just to create output. You do not need to study the schematics for graphics cards to write your game. Windows wraps up this functionality by providing generic routines that communicate with the drivers written by the manufacturers of hardware. This is probably the main reason why Windows has been so successful. The generic routines are referred to as the Windows API (Application Programming Interface).